A 1996 study conducted by researchers at the USDA and the University of Connecticut at Storrs shows that the antioxidant activity of both green and black tea was higher than many common fruits and vegetables, including broccoli, cauliflower, strawberries and garlic. What accounts for tea’s ability to fight free radicals? Researchers from Horticulture Research International say it’s polyphenols, a type of phytochemical. Within the polyphenol group are catechins (which act as antioxidants), from which theaflavins and thearubigins are produced during the manufacture of black tea. Theaflavins and thearubigins contribute to the red color of black tea, and also act as potent antioxidants.

Research in Japan also indicates that components in black tea may have antioxidant and antimutagenic effects. The researchers concluded that the theaflavins in black tea clearly suppress cancer cell growth (in animals) at early and late stages of development. Yet the need for further investigation into just how tea phytochemicals work to reduce the disease is crucial.

Soy has been in the headlines a lot lately, with news that it is good for everything from relieving menopause symptoms to reducing osteoporosis risk to helping prevent heart disease. Soy products have also been intensely studied for their cancer-fighting potential. Observations of the Japanese diet and the breast cancer mortality rate found that soy consumption was associated with an approximately 50 percent decreased risk of breast cancer in premenopausal women.

Soybeans contain a group of phytochemicals called isoflavones, which are found in significant amounts only in soybeans. The two primary isoflavones are daidzein and genistein. These compounds may reduce the risk of a number of cancers, including those of the breast, lung, colon, rectum, stomach and prostate.

The mechanisms by which isoflavones inhibit cancer cell growth vary depending on the cancer. With breast cancer, for example, the isoflavones block the activity of naturally produced high levels of estrogen that can increase risk of breast cancer. While it appears that daidzein is more bioavailable than gentstein, most of the research interest in the anti-cancer effects of soybean isoflavones has centered on genistein. Genistein is thought to act against cancer in several ways: by interfering with cancer-promoting enzymes, by blocking the activity of hormones in the body, and even by interfering with the process by which turnors receive nutrients and oxygen. 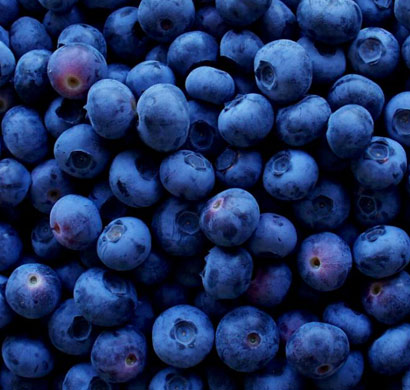 Nutritionally, blueberries have never been known as super-fruits. Now, however, new studies by the USDA and University of Illinois scientists point to health benefits from eating wild blueberries that may be as far-reaching as preventing cancer. Scientists attribute these benefits to anthocyanins (the pigments responsible for the berry’s blue color) and the phytochemical proanthocyanidin found in the berries.

USDA scientists Ronald Prior and Guohua Cao have demonstrated that blueberries have the highest antioxidant capacity of the 40 different fruits and vegetables they tested. “The antioxidant characteristics in blueberries appear to be due largely to anthocynins,” says Prior, whose earlier research led to his hypotheses that the pigment of red and blue fruits was an important factor in their cancer-fighting abilities. Wild blueberries contain the highest anthocyanin levels of any berries commercially available in North America.

At the University of Illinois, cancer researcher May Ann Smith and associates showed that proanthocyanidin in wild blueberries inhibits an enzyme involved in the promotion stage of cancer. Smith applied extracts from wild blueberries, cultivated blueberries and bilberries (the European cousin of the wild blueberry) to living cells at various stages in cancer development. Wild blueberries exhibited the greatest anticancer activity of all the berries.

Phytochemicals may not be uppermost in health-conscious consumers’ minds – yet. But judging by the amount of scientific research on the compounds and their health benefits, phytochemicals may just be the next hot topic at the dinner table.

Will food manufacturers cash in on this craze-in-the-making? It’s a tough call, but certainly there are enough plant products that contain potentially useful phytochemicals from which to choose. However, what’s needed is good research on how phytochemicals are affected by processing technology. That – and a clear understanding of how the FDA would view any phytochemical-type claims – would make for a much more friendly environment for developing functional foods containing phytochemicals.

According to Dr. Walter Glinsmann, adviser to the FDA, “The primary determinant (of regulatory category) is intended use. Functional foods could be considered conventional foods, special dietary supplements or medical foods used by physicians to manage disease.”