EVERYBODY LOVES BLUE. Blue skies, blue eyes (at least in Nordic and Anglo-Saxon countries), candor, innocence, all such connotations. Blue flowers are in such demand, are such certain sellers, that the nurserypeople have to stretch the meaning of the word to its snapping point. More than half the flowers described in seed lists and plant catalogs as blue are some shade of mauve or purple. Truly blue flowers are few.

Yet many gardeners insist on having a blue border. Gertrude Jekyll, writing at the turn of the century, was a wise old bird and is worth quoting on this (from Colour in the Flower Garden):

It is a curious thing that people will sometimes spoil some garden project for the sake of a word. For instance, a blue garden, for beauty’s sake, may be hungering for a group of white Lilies, or for something of palest lemon-yellow, but it is not allowed to have it because it is called the blue garden, and there must be no flowers in it but blue flowers. I can see no sense in this; it seems to me like fetters foolishly self-imposed. Surely the business of the blue garden is to be beautiful as well as to be blue. My own idea is that it should be beautiful first, and then just as blue as may be consistent with its best possible beauty. Moreover, any experienced colourist knows that the blues will be more telling–more purely blue–by the juxtaposition of rightly placed complementary colour. 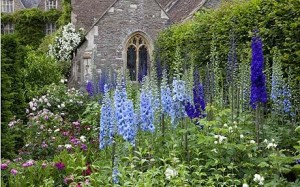 More than any other color blue needs contrast near to it, to prevent its looking dull. Since blue flowers are comparatively few, most gardeners cheat by including mauves–lavender, especially–and campanula blue (which is never pure) in their blue border. Miss Jekyll always kept these colors separate, and she was right. They do not help each other, being close in color, yet not the genuine article.

Delphiniums are the most obviously blue flowers, though they include many other delightful shades and these should not be forgotten. The contrast of a deep, cobalt-blue delphinium (hardy to USDA Zone 3) with the corymbs of bright, mustard-yellow Achillea filipendulina is too crude, however. Rather, site a blue delphinium near the pale, greeny yellow scabious flowers of Cephalaria alpina, which grows nearly six feet tall. In large flower arrangements, an ideal contrast in color and form is achieved with spikes of blue delphiniums and double pink peonies, such as ‘Sarah Bernhardt’.

If you find the traditional delphinium rather too stiff and self-assertive, remember the lower-growing belladonna types (Zone 3), which have no dominant main spike but whose branches are equally important. They are good blenders, for instance with pink sidalceas, or with the pale yellow fluffs of Thalictrum flavum subsp. glaucum, whose blue leaves are especially appropriate companions. The ‘Connecticut Yankees’ seed strain belongs to the belladonna group and you can pick your favorites from the mixture. Unfortunately, on my heavy soil slugs invariably defeat me. I should try harder.

Salvias include most colors and there are pure blues among them, though you have to give up some hardiness in the deal. I can just about get away with S. uliginosa (Zone 7; we keep some spares under glass). In late summer and fall, this six-foot plant has short, pale blue spikes. Where hardy, it makes a colony by suckering. It is a lovely thing that combines well with pink or pale yellow dahlias or with red dahlias, come to that. But do contrast it with something, else it is wasted.

The rich blue S. guaranitica ‘Blue Enigma’ (Zone 8; 5 ft.) is also excellent at the same season, and of proudly upright habit, with plenty of rich green foliage. I think it is exciting with orange Tithonia rotundifolia ‘Torch’ (6 ft.), which is an annual akin to zinnias.

The gentian sage, S. patens (Zone 8; 18 in.), an old favorite, is pure, rich, deep blue, with ‘Cambridge Blue’ its pale counterpart. You can either overwinter their tubers in damp soil in a frost-free shed or raise them from seed to flower all in the same season. My only objection to this salvia is that each spike seldom has more than two blooms in flower at a time. The plant becomes a bit stringy as the season advances and benefits from being clipped over at midseason.

The borage family has many blue-flowered members, though a high proportion of these are adulterated with mauve, as you will discover when trying to photograph forget-me-nots (Myosotis spp.). The result is always muddy. But they are a springtime theme, and I have forget-me-nots colonized through all my mixed borders. Myosotis scorpioides (Zone 5) is another good species to take over. It flowers a month later than ordinary forget-me-not and each flower has a yellow eye. I remember seeing wonderful colonies in the late Helen Stoddard’s Massachusetts garden. 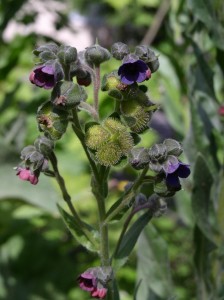 The bluest of all this borage group is the dazzling Cynoglossum amabile (r18 in.), which is grown from seed and can either be treated as an annual or, my preferred method, as an autumn-sown biennial to flower in May (but its hardiness can seldom be trusted). I like to grow the cynoglossum alongside Leymus arenarius, the blue lyme grass–a ferocious spreader, but so beautiful. (Many grasses–especially all those called glaucous, which means blue-harmonize with blue flowers.) We lift the grass every year, to restore order, but it takes an hour or so to trace and remove all its underground suckers.

Another borage relative that must not be omitted is the clump-forming Omphalodes cappadocica (Zone 6; 9 in.) in an intense blue cultivar such as ‘Cherry Ingram’, or the, alternately blue and white ‘Starry Eyes’. These flower for a long time in spring and, being tolerant of quite deep shade, I like to see them beneath red camellias, whose fallen blooms still retain their color and make a carpet around the blue.

Fancy getting this far without mention of gentians. In spring, Gentiana verna (Zone 5; 3 in.) is so incredibly intense and pure that you feel there must be a catch somewhere. There is. Unless we are devotees, few of us can keep it for longer than two or three years. The trumpet-flowered G. acaulis (Zone 5; 6 in.) is far easier and readily makes mats of foliage, but is shy in some gardens. I like it as a path edging with double red daisies (Bellis perennis) of the quilled, pomponette type.

In summer if the climate is not too hot, we are on much safer ground with the willow gentian, G. asclepiadea (Zone 5; 2 ft.), with a graceful, arching habit and a double rank of blue, tubular flowers. This likes woodland conditions and would look good with a glaucous-leaved hosta. It self-sows freely in some gardens but needs enlivening somehow, and I fancy that orange or red crocosmias, the small-flowered C. pottsii, for instance, might do the trick. You try it and let me know; I can’t fit in everything into my garden I should like to.