A widespread bias against orange prompts writers to resort to such euphemisms as flame, tangerine, and apricot. Yet there’s an inconsistency here. Marigolds are popular annuals, and marigolds serve up great gobs of orange. Sophisticates prefer Zinnia angustifolia, which is dainty of flower and leaf but still unabashedly orange. And which of us hasn’t admired butterfly weed (Asclepias tuberosa) in a green meadow, or California poppies (Eschscholzia californica) on a grassy hillside? It isn’t the color itself that offends but the way in which it is used.

Orange does need careful juxtaposing – thumbs down, from most of us, to orange with magenta. As a solitary blob among the pinks, crimsons, and lavenders that predominate in the gardener’s palette, orange is likely to strike a jarring note, but it intermingles pleasantly with a medley of colors of similar value or brilliance, especially if the flowers are of the same form – mixed zinnias, for instance, in bright pink, orange, scarlet, and yellow.

The complementary color of orange is blue, and the two combine in sometimes dazzling combinations: ‘Enchantment’ lilies, say, with sky-blue delphiniums. The blue gray or blue green of foliage is subtler. Try blue oat grass (Helictotrichon sempervirens) with orange poppies or daylilies, or blue-leaved hostas with orange geums.

For orange to really lift the heart, put it with its analogous colors of scarlet and warm yellow, linked with chartreuse foliage. You might want to add “purple” foliage, or blue and violet flowers. A favorite combination of my own is in a partly shady corner enlivened in spring by a scarlet-flowered azalea rising over a carpet of golden creeping charlie (Lysimachia nummularia ‘Aurea’) underplanted with an orange-flowered celandine, Ranunculus ficaria ‘Cupreus’. Orange is a sunny color. Let it shine.

Lychnis xarkwrightii (USDA Zones 4-8; 12-18 in.) is a delectable summer concoction of bitter chocolate and tangerine to compete with such sunny yellows as Coreopsis ‘Sunray’ or to display against the light foxy brown of New Zealand sedge (Carex buchananii). ‘Vesuvius’ is the best form.

Cosmos colors can confuse. In the C. bipinnatus range, “red” means crimson; in C. sulphureus, “red” (as in ‘Sunny Orange-Red’, 12-15 in., shown here) means orange or scarlet. Sow seed under lights for an early start, then plant the seedlings out after the last frost. These tender annuals may self-sow in light or sandy soils.

In deep, sandy soil, butterfly weed (Agclepias tuberosa; Zones 3-9; 18-24 in.) is a perennial that defies drought. In autumn, gossamer seed parachutes from the torpedo-shaped pods that follow the orange flowers. The ‘Gay Butterflies’ strain yields an occasional scarlet or yellow form.

In frost-free regions, lion’s tail, or lion’s ear (Leonotis leonurus; Zones 9-10), grows five to six feet trill and bears its showy whorls of flowers from late summer into winter; elsewhere it may be grown as a three- to four-foot annual. Start the seeds indoors and set the young plants out, in full sun, after frost.

The large, nodding flowers of Crocosmia ‘Emily McKenzie’ (Zones 7-8; 2 ft.) are among the showiest of the montbretias. Less hardy than the popular ‘Lucifer’ and more finicky about soil, which should be neither wet nor dry, it is well worth the effort to please. 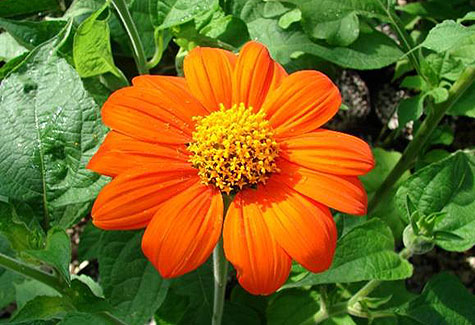 Drought-resistant Mexican sunflower (Tithonia rotundifolia) is a half-hardy annual that thrives on heat, making it a good choice for desert gardens. The six-foot ordinary form of the species will need staking, but the four-foot selection ‘Torch’ might get by without it if the soil isn’t too rich.

Calendula officinalis (12-18 in.), a long-blooming cool-summer annual, got the name pot marigold from its use in flavoring soups. Petals sprinkled on rice pudding add an appetizing touch of color. Don’t confuse them with French and African marigolds (Tagetes spp.).

There is no sturdier lily than ‘Enchantment’ (an Asiatic type; Zones 4-8; 2-3 ft.), nor a brighter color. Where voles are a problem, surround it with gravel to discourage them, or grow it in sunken containers in sun or light shade. Sharp drainage is imperative for all lilies.

Dahlias with burgundy-colored foliage such as ‘Bishop of Llandaff’ have long been sought by connoisseurs. The compact ‘Ellen Houston’ (Zone 8/9; 2-2 1/4 ft.), with its glowing blend of purple foliage and orange flowers, is every bit as eye-catching. Lift and store the tubers for the winter in a cool, frost-free place.

Small, glossy, hollylike leaves, blood-orange-colored flowers in spring, and blue-black berries in fall add up to a covetable barberry, but the Chilean origin of Berberis darwinii (Zones 7-10; 5-10 ft.) sounds the warning, “for moderate climates only.”

Viola ‘Jolly Joker’ (5 in.) mocks those who think that orange and violet clash; in fact, it could be used to tie together these usually warring colors in a “hot” border. Give this cheerful annual good moisture-retentive soil, and deadhead it often to keep the flowers going. It will, alas, peter out in the summer heat.

Compact Geum ‘Borisii’ (Zones 4-8; 1 ft.) appreciates good soil and afternoon shade where summers are hot; dry soil brings the risk of spider mites. It is lovely with the blue-green leaves of Hosta ‘Halcyon’, exciting with the yellow ones of H. ‘Gold Standard’.