Where Delphiniums are concerned, good taste flies out the window,” essayist and devoted gardener Eleanor Perenyi conceded in 1981 in Green Thoughts (Vintage Books; $12, paperback). Flaunting “all the sapphires and azures of a Chartres window,” the flower-packed spires of the giant hybrids sometimes reach seven feet. Unfortunately, these rulers of the delphinium race, as Mrs. Perenyi calls them, are lately frowned upon by those who see no place for such gaudy showmanship in today’s more “natural” landscapes. Surely the plants’ outrageous colors (including newly available pinks, reds, and yellows, in addition to every shade of electric blue, lavender, and mauve), annoying behavior (a single rainstorm is all that is needed to destroy any unstaked spires), and disease susceptibility have no place in pesticide-free gardens dominated by native plant species and other, less-histrionic bloomers. 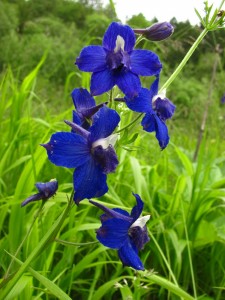 Yet, like a too-rich dessert, many gardeners still crave these showy perennials, hardy in Zones 4-8. Interplanted with shrub roses (which can help support the brittle spires) and pure-white candy lilies (like delphiniums, they bloom in late spring or early summer), perennial as well as annual delphiniums satisfy deep longings. For starters, few other flowers offer a more brilliant – or fascinating – range of blues. And when massed in the back of a border in groups of three or five, still fewer plants convey the charm of a traditional cottage-style garden more eloquently.

Fortunately, today’s savvy gardeners are learning to cope with the shortcomings of their favorite horticultural prima donnas. Success is always a possibility, they insist, as they gamely confront the Six Most Common Delphinium Dilemmas:

1 Delphiniums are too tall. Some hybrids, bred originally for competition, tower over today’s smaller gardens, dominating mixed borders of ornamentals of more modest stature. Indeed, “modern monarchs” is how gardeners in the 1930s and ’40s referred to these genetic triumphs (generally hybrids of the species Delphinium elatum), Graham Rice reveals in Hardy Perennials (Timber Press; $27.95 hardbound, $17.95 paper; for a copy call 800-373-5680). But delphiniums of the Pacific Coast and Blackmore & Langdon strains (among the tallest available to American gardeners) are not the only types available. Gentian-blue D. grandiflorum ‘Blue Mirror’ reaches just two feet and blooms all summer long. The dwarf Magic Fountains strain, available in dark blue, sky blue, lilac, white, and bicolors, grows to 28 inches. With blossoms of light blue, lavender, or white, the Connecticut Yankee strain, developed by the photographer Edward Steichen, tops out at 30 inches. All add breathtaking grace to the middle of borders and beds.

2 The plants are too expensive. Members of the buttercup family (Ranunculaceae), delphiniums perform best in temperate climates – like the Pacific Northwest and England. Gardeners in regions plagued by extremes of heat and cold as well as by high humidity and the freeze-thaw cycle that causes plants to heave right out of the ground frequently lose plants to the weather. Rather than spending $7 to $10 a pot, thrifty gardeners grow their own plants from seed and treat their delphiniums as biennials. Seed sown indoors in March is transplanted to peat pots in May; young plants moved outdoors during the summer will bloom sparsely toward season’s end. The following spring, however, a glorious show awaits. In this fashion, for the cost of a packet of seeds, many delphiniums are planted instead of the customary three or five. Even if just half the young plants make it through winter, a good crop is almost certainly guaranteed for the following year.

3 Delphiniums raised from seed take too long to bloom. For near-instant gratification, try annual delphiniums, commonly called larkspur (so named for the blossoms’ resemblance to a bard’s foot). The seed of D. ajacis (a k a Consolida ambigua) sown directly in the ground after all danger of frost has passed will bloom profusely come summer (the plants’ fernlike foliage provides a handsome contrast with other colorful annuals). Or, in the north, seed may be sown after autumn’s first frost and allowed to go dormant in anticipation of a radiant spring display. Southerners can sow seed in late summer for bloom early the following spring.

4 Pests and diseases plague delphiniums. Avoid root rot by mulching just to the plant’s drip line – never near the crown (where stem and base meet). To deter slugs, top-dress with ashes, or spread a wet newspaper near the plants each evening and remove the slimy beasts the following morning. To limit disease-inducing humidity, make sure plants have plenty of elbow room. Soil should be rich and friable (amend with sand, if necessary), never caked with clay. A cup of powdered lime added to the planting hole and an annual topdressing with another cup will also help these alkaline-loving plants stay happy. As an extra precaution against disease, consider moving your delphinium plants to a fresh site every three seasons.

5 Delphiniums are too much work for a scant three weeks of late-spring bloom. In fact, plants will bloom two and even three times if dead-headed correctly. Cut down spent flower stalks, allowing leaves to remain. When foliage has yellowed, remove it as well; you will notice new shoots at the base of the plant. Soon you will have your second bloom.

6 Delphiniums require too much sun. Consider planting another Ranunculaceae family member, instead: Aconitum napellus, commonly called monkshood, bears delphinium-like stalks of deep-violet, helmet-shaped blossoms even in the shade. A popular flower in Europe since medieval times, monkshood is sometimes called wolfsbane, owing to the ancient practice of poisoning wolves with the plant’s extracts. Its sinister reputation aside, monkshood remains a valuable plant for the shade garden. Reaching four feet in height, flowers bloom three weeks or longer and seldom, if ever, require staking. Cultivars worth investigating include the violet-blue ‘Spark’s Variety’ and the blue-and-white ‘Bicolor’. As Rob Proctor points out in Perennials: Enduring Classics for the American Garden (HarperCollins; $29.95), cut flowers boast a long vase life but are not recommended for use as dinner-table decorations.